Skip to content
Notice: Welcome to our university.
Quick Links

Google Images (I do not own the copyright to this image)

I Samuel 16: 10-12  Jesse had seven of his sons pass before Samuel, but Samuel said to him, “The Lord has not chosen these.” 11 So he asked Jesse, “Are these all the sons you have?” “There is still the youngest,” Jesse answered. “He is tending the sheep.” Samuel said, “Send for him; we will not sit down until he arrives.”12 So he sent for him and had him brought in. He was glowing with health and had a fine appearance and handsome features.Then the Lord said, “Rise and anoint him; this is the one.”

Have you ever felt like there is more to life than this? have you ever felt like there is a higher calling? There is something about you that cause you to stick out like a sore thumb? Well there is. When you are set apart, called, anointed but not yet appointed to your place of purpose you know deep down in your soul that you are not serving or fulfilling the purpose that you was created to do. This creates a yearning in your soul that only God can fill.

To be anointed is to be endowed with Spiritual abilities that are uncommon to the average person. Often times people do not choose to be anointed or even seek to be anointed as in the case with David. He was far away on the backside of the desert caring for his fathers sheep. He had no idea that the Lord had chosen him to be anointed king over Israel. 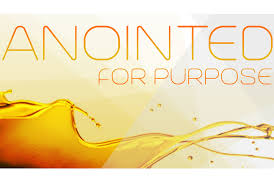 When the prophet Samuel came David’s house, David was nowhere to be found because he was busy in fields with the sheep, David cared deeply for the sheep he took his job seriously. I can just see David gently, shearing each sheep, anointing their heads with oil, leading them into green pastures and fighting off bears and lions that would attack them. David loved the sheep and would gladly lay down his life for them but God had another plan. God wanted to make him a shepherd of people, He was destined to be the King of Israel.

David was not Samuel’s first pick, he was not even the fifth choice, he was the eighth and final choice. His own father did not esteemed him highly enough to be the King of Israel but God did.  You see the anointing will chase you down and find you even in the crack house, in the ghetto, on the job, broken down on the side of highway, struggling with all kinds of addiction, depression, suicidal tendencies. No matter where you find yourself God is there with. This is reason that David Could say with confidence that, “If I ascend up into heaven, thou art there: if I make my bed in hell, behold, thou art there. (Psalm 139:8).

I don’t know who you are but I hear the Lord saying that He is coming after you. He has sent his prophet to anoint you. You are coming out of the backside of the desert, you are coming out of obscurity. There is a place for you in the palace, a crown is waiting for you, a place of honor and notoriety, you have not asked for this but you have been chosen and set aside for such a time as this.

This site uses Akismet to reduce spam. Learn how your comment data is processed.